Prior to the construction of Charlestown Harbour the area which was to become Charlestown was a small cove known as West Polmear, with a farm and a resident population of nine who lived in a scatter of cottages.  They earned their living by fishing and assisting with the loading and unloading of vessels beached in the cove. This was a rsky process which resulted in numerous wrecks.

Charles Rashleigh (1747-1823), after whom Charlestown is named, was member of an important local family, the Rashleighs, who lived at Menabilly, near Fowey (made famous as the home of Daphne du Maurier and the setting for Rebecca).  Charles, the 10th son of Jonathan Rashleigh, became a St Austell bas4ed lawyer, banker and mining entreprenour; with interests in several local mines.

It is difficult to imagine today but, in the late 18th and 19th centuries, the hinterland north of St Austell Bay was a rapidly developing mining and industrial area.  The landscape was dominated by Cornish engine houses, mine winding gear, ore dressing floors and workshops.

A thousand or more people toiled to extract copper and tin ore from the mines (the parish contains the sites of over one hundred mine shafts), making this one of the foremost mining areas in Cornwall, at a time when Cornwall was the largest tin and copper producing orefield in the world.  Polmere mine lay under the hillsides around what was to become Cahrlestown, finally closing in 1900. 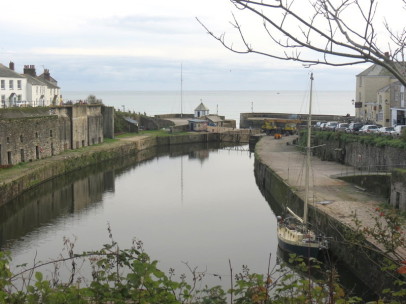 In order to provide a safe haven for the shipping of ore produced by the local mines, Rashliegh decided to contruct a harbour.  A protecting pier was constructed in 1791, followed by a tidal basin that was completed in 1798.  The shipping of copper ore, china clay and china stone, and the importation pf coal, timber and limstone appear to have been the principal activities in the early years, together with shipbuilding and lime burning. 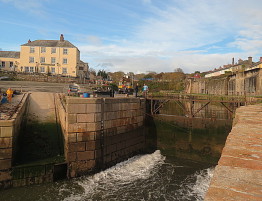 The cobbled car park of the Rashleigh Arms was originally laid to store copper ore prior to shipment.  To protect the port, Charles Rashleigh had a battery constructed at the top of the hill on the west side of the Harbour in 1793.  The lock gates were later installed, the basin enlarged, and the shipping of china clay became the chief activity.

Charles Rashleigh built himself a fine mansion at Duporth (about half a mile west of Charlestown) which, after various changes in ownership, became the focus for a holiday village after the second world war.  The house itself was pulled down in 1988, but the Pentewan-type stone from which it was constructed, was recovered and used by the National Trust for restoring buildings, such as Antony House near Torpoint.

Some time before St Paul's Church was built, a Methodist Chapel had been started in Charlestown in 1799.  The present Chapel was built in 1828 and closed in 1998. Charlestown School originated as the Chapel Sunday School which developed into a Daily School in a purpose-built schoolroom behind the chapel, moving to the "old" Chalrestown School on the opposite side of Charlestown Road in 1895 and then to its present building in Campdowns in 1973.

Shortly after the Rashleigh era, the Charlestown Estate came to be controlled by the Crowder family.  In their paternalistic hands it remained, largely unchanged, for 160 years until the estate was old and broken up in 1985.  Their house, The Grove (now a retirement home), was situated at the top of charlestwon Road, opposite Charlestown Engineering.  This road was conctructed wide enough to allow several horse drawn clay wagons abreast to acend and descend the hill to the harbour.

Most of the houses around the harbour were constructed in the 1790s or shortly thereafter.  Further up the hill, near where St Paul's Church now stands, a foundry was established by the Mitchell brothers from Redruth, in 1827, to produce ironwork for the local mines.  A leat brought water from Molinnis Moor, near Bugle, to power a waterwheel at the foundry and to feed two large ponds in the valley on the east side of Charlestown, which kept the harbour water level topped up.

Nowadays, Charlestown Engineering is owned by Svedala Ltd, who still produce equipment for the mining industry.  China clay dries, fed by a pipeline from the clay works, were also built at Charlestown.  The chimney is still a prominent feature of the village skyline.  The dries are no longer in use and have been partially incorporated into the Shipwreck Centre and the Bosun's Diner.

Because of its period charm, may films and TV dramas have been made around the harbour in recent years, such as "The Eagle has Landed","The Voyages of Charles Darwin",  "The Three Musketeers" and "Frenchman's Creek".

Several sqauare rigged ships are currently based at Charlestown, the sight of whose masts rising above the roofs of the harbour buildings, create an exciting and evocative spectacle for visitors coming down Charlestown Road.  The late 18th/early 19th century buildings around the harbour and in the village are now part of a conservation area, and present day activity is now more associated with tourism, advanced engineering, the film industry and good places to eat, rather than with the shipping of minerals.